Walk along the Jordanese canals, visit the unique petite restaurants and be amazed by the silence of the courtyards. Get your free city map with the route at Bakkerwinkel, Warmoesstraat 69 and see the places of interest on your phone. 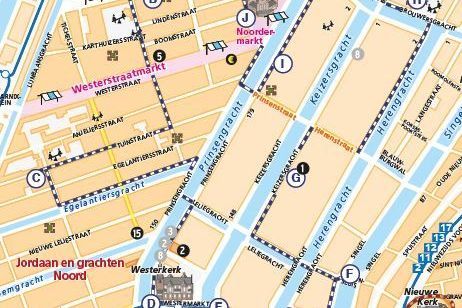 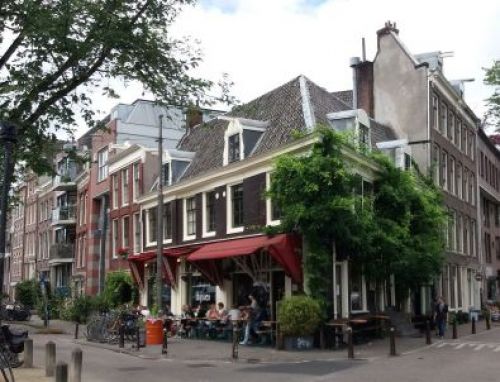 We start the walk at Lindengracht, at Cafe Thijssen. This is the ideal spot to get your copy of this map, and prepare your walk by having a delicious cup of coffee, lunch or well-tapped beer, before you hit the road. The cafe is named after writer, politician and teacher Theo Thijssen, who is mostly known for his book Kees de Jongen (Kees the Boy). In front of the cafe, you will find the statue of Theo Thijssen, made by Hans Bayens and reveiled by former mayor of Amsterdam Wim Polak on the 100th birthday of Thijssen, June 16th 1979. Theo Thijssen was an Amsterdam  and Jordanese inhabitant in heart and soul. He's still being loved by the nowadays Jordanese inhabitants. A bit further on this route, in between stopping point H and I, you will be close to the small Theo Thijssen Museum, which is situated at Eerste Leliedwarsstraat 16.

Just around the corner, at Brouwersgracht, you will find Sweet Bob Amsterdam; over here you could buy the most delicious brigadeiros, a sweet addiction for life! 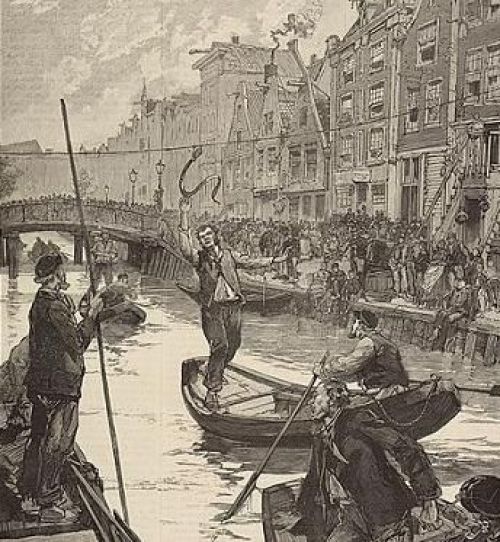 The gables at Lindengracht show eight artisans; one of the many examples of that the Jordaan area was a real working-class neighbourhood. The Lindengracht was scene of an important uprising: the eel uprising (Dutch: palingoproer). On Sunday the 25th of July 1886, policemen cut down the rope on which an eel was hanging. The rope was stretched over the Lindengracht, which was in that time still a real ditch. It was for a game, during which contestants stood on a small, wobbly boat, and tried to rip the eel - alive - from the rope. You can imagine that it was hard not to fall into the water and that it was very funny to watch this spectacle. This time, the police ended this 'cruel entertainment'. Immediately, the people turned against the police, who had to make their way through the crowd, with drawn sabre. The day after that day, new uprisings begun, which ended with 26 deaths and many wounded. Were the uprisings really about the prohibition of the game? At the end of the 19th century, there was much dissatisfaction in the Jordaan area. The living conditions were very poor and the government was not trying very hard to improve it. And now, the police came to end a "harmless game" in addition; the Jordaan inhabitants did not take it anymore!

On your way to stopping point C, you will find the Muizenhuis (Mouse House), a fantasy world of toy-mouses. 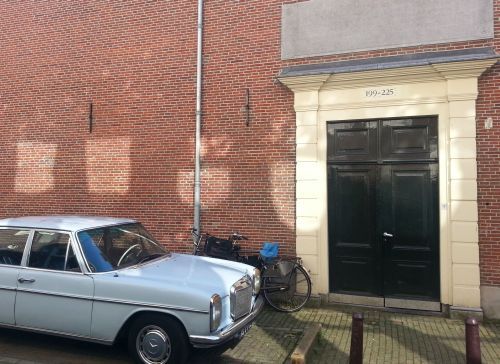 About the Zeven Keurvorstenhofje (courtyard of the Seven Electors), the courtyard is normally open to visitors, but due to COVID-19 it remains closed until further notice. People can only guess about the origin of the name of the courtyard. It was founded by Cornelis Martenszoon Pronck; you would expect the name Pronck(en)hofje (courtyard of Pronck). The courtyard existed of seven small houses, and was decorated with garish gable stones and verses. It is possible that the coarse Amsterdam inhabitants, who were not very fond of the Roman Catholic church and the inhabitant of the courtyard, have shouted: 'Look at that Pronck-ish (i.e. showy) courtyard! The houses look like seven small palaces, the palaces of the seven electors!' Most likely, the courtyard was founded in 1645, but later some houses were added. On these houses, you could see a plaque. If you add up the capital letters of the plaque as Roman numerals, you will know in which year these houses are added to the courtyard. (Tip: W = VV)

A tip for a nice Dutch lunch on your way to point D: PANCAKES Amsterdam gives a new Amsterdam twist to the traditional pancake restaurants and makes the most delicious pancakes and "poffertjes"! 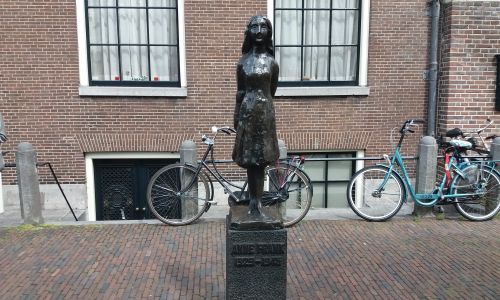 A little further on the route, a small statue of Anne Frank is standing in front of the Westerkerk. Since the Anne Frank House is just around the corner, this small statue is photographed very often by tourists from all over the world. From the 6th of July 1942 to the 4th of August 1944, Jewish Anne Frank had lived together with her own family, family Van Pels and dentist Frits Pfeffer in the very small hiding place at Prinsengracht 263, to hide for the Nazi-Germans. Anne Frank is famous in the Netherlands and beyond for her diary in which she described the life of a young, teenage girl in hiding so painfully striking. The small statue was reveiled by former mayor Samkalden on the 14th of March 1977, which date is mostly being held as the alleged dying day of Anne Frank. She was murdered in 1945 in concentration camp Bergen-Belsen. In 1979, a contest to create the most beautiful design for a gay monument was held in Amsterdam. Karin Daan won this competition with her design which consists of 3 pink triangles which form together 1 large triangle. A text, freely translated in English "Such an immoderate longing for Friendship" is written on the triangle on the ground. The Dutch frase is a verse of the homosexual Jewish writer Jacob Israël de Haan (1881-1924). The three triangles stand for present, past and future. 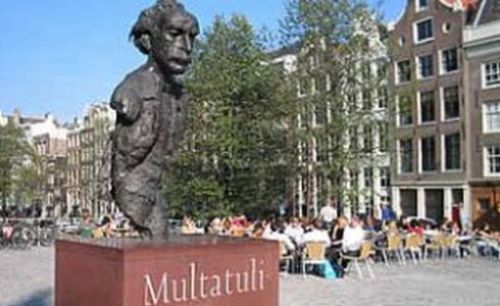 Did you know that the Torensluis is the oldest bridge of Amsterdam, which is being kept in original state? The bridge is this broad, since it was one of the most important gateways into the city, where people had to leave their horscarts and had to enter the city by foot. The Jan Roodenpoortstoren (a large city gate tower) was situated on the bridge; you could see a mark on the ground where the tower was standing. Under the bridge, we still find the old dungeons are still present in the head of the bridge. On the Torensluis, you will find the statue of Multatuli, the pseudonym of Eduard Douwes Dekker. He wrote the famous Dutch book Max Havelaar, which played a key role in shaping and modifying Dutch colonial policy in the Dutch East Indies in the nineteenth and early twentieth century.

Tip for a break: take a look at Reypenaer Cheese for handcrafted chees and cheese tastings, or eat a delicious burger (or go for a refreshing milkshake) at Ellis Gourmet Burger across the bridge, or come back in the evening to party at drag bar & restaurant 't Sluisje.

G. House with the heads 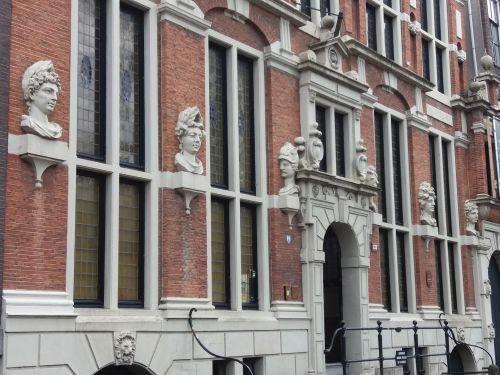 The House with the Heads (Dutch: Huis met de Hoofden) catches the eye by the many adornments and the stone heads which stand out on the facade. Most probably, these heads represent the heads of six Roman gods. Three men and three women, all accompanied with their own attribute: Apollo and his laurel wreath (arts), Ceres and her ripe cornstarchs (agriculture), Mercure and his winged helmet (commerce), Minerva (wisdom), Bacchus and his bunches of grapes and Diana and her half moon (hunting). The heads on the left and right of the main entrance, the ones of Mecure and Minerva, would point out that De Geer, the family who lived for four generations in the house (and who placed the heads on the gable), identified himself with both commerce and wisdom. Nowadays, the ideosyncratic Ambassy of the Free Mind is situaded in the House with the Heads. 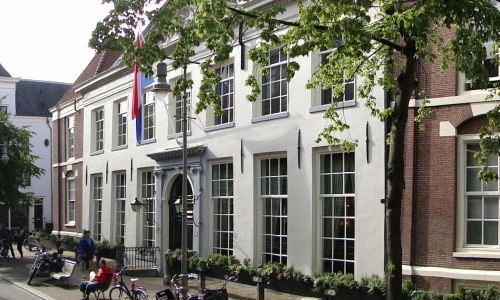 At the beginning of the 17th century, Herenmarkt square was called the Varkensmarkt (pig market), where, as the name already suggests, pigs were being dealt in Amsterdam. In 1617, on command of the government, a meat hall was built on the market square with an entrance below the high trottoir at former Haarlemmerstraat. Six years later, the buidling was rebuilt to become the headquarters of the Dutch West India Company (WIC) and it was called the West India House (in Dutch: West-Indisch Huis), by which name it is still known today. In that time, the WIC was mainly occupied with New Netherland (the current east coast of the USA), the Carribean area, Brazil and the west coast of Africa. Captan-Admiral Piet Hein conquered the well-known Spanish silver fleet, of which silver, spices, silk and amber was kept as plunder in the cellars of the West India House. Another remarkable historical fact about the West India House is that the decision to establish a settlement on the Isle of Manhattan, to be named New Amsterdam, was made within this buidling. In 1664, New Amsterdam was taken by the English; they changed the name of this small settlement into New York. 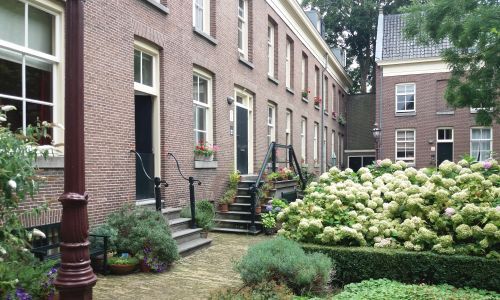 On the other side of the canal, you are officially not within the Jordaan area anymore, but within the canal belt. Here, you will find the two courtyards Zon's Hofje and the Van Brienenhofje, next to each other. Both courtyards are opened to visitors (Zon's Hofje Mon-Fri, 8am-6pm and Van Brienenhofje Mon-Fri, 6am-6pm and Sat 6am- 2pm). For the founding of the Van Brienenhofje, a house, a warehouse and a beer brewery were bought up to be demolished and to build a courtyard on this place. Founder Arnaut van Brienen called the courtyard "Van Brienen's Founded Courtyard The Star", in which The Star refers to the name of the former beer brewery. On the outside of the courtyard, you could see a gold star above the clock, referring to the origin of the courtyard. The son of Arnaut van Brienen had to finish the building of the courtyard, since he himself died in 1804. At the beginning of that year, the foundation stone just had been placed. The courtyard was originally meant for Roman Catholic elderly only, but nowadays, the courtyard is being inhabited by both married as unmarried, catholic and non-catholic inhabitants above the age of 45 with a low income. 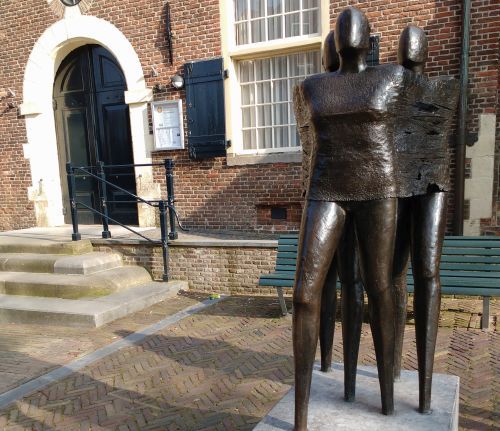 When you walk along the Noorderkerk (Northern Church), you'll find the statue Eenheid de Sterkste Keten (Unity, the Strongest Chain). This statue is made by Sophie Hupkens and placed in 1987, in memory of the Jordan Riot in 1934. This riot took place as an outburst after years of discontent and poverty in this area, caused by large unemployment and the poor economy. The inhabitant threatened to burn the bridges and they barricaded street and broke them open. The police reacted strongly and a bit later even the army, on behalf of minister-president Hendrik Colijn. There were wounded and even death people and the riot spread to other neighbourhoods; after five days, the riot was ended violently and the damage was being repaired. Despite the fact that the riot spread to other parts of Amsterdam, it was nowhere as fierce as in the Jordaan area.