The entrepreneurs of the Damrak, around Dam square, the Rokin, the Kalverstraat and the Nieuwendijk have joined forces and choose to promote their neighborhood under one name: the Paleiskwartier (Palace Quarter). This neighborhood is characterized by impressive buildings such as the Palace on Dam Square, the Beurs van Berlage, the Bijenkorf departement store, famous squares such as Dam square and the Beursplein and has a rich history.

The Damrak, the bustling entrance to the city centre and also the first impression of the city from Central Station, was until 1845 the part of the Amstel between the Dam and the IJ. Today this street is characterized by large flagship stores, various hotels and eateries and of course the North/South subway line. The recently renovated Beursplein, flanked on both sides by the imposing buildings of the Beurs van Berlage and the Bijenkorf, has become a square with global allure. The sunny terrace of Bistro Berlage cannot be resisted for a drink, lunch or dinner.

Dam Square is probably the most famous square in the Netherlands and, among other things, the location of the National Remembrance Day on the 4th of May. The Royal Palace on Dam square was built between 1648 and 1665 as the town hall of Amsterdam after a design by Jacob van Campen and was also called the eighth wonder of the world: this building made such a great impression on the people of Amsterdam. The square is surrounded by the Nieuwe Kerk, the Bijenkorf, NH Collection Grand Hotel Krasnapolsky, the Industrieele Groote Club and Madame Tussauds and offers space to clothing stores such as H&M, museums such as Ripley's Believe It or Not!, GASSAN Diamonds and various eateries. On the square you will find the national monument, in remembrance of World War II. The square also offers access to the Kalverstraat and Damstraatjes with many more special shops.

Rokin, as part of the so-called 'Red Carpet', may have undergone the biggest change in recent years; the street that in earlier times housed the first Amsterdam stock exchange, the Nederlandse Bank (Dutch Bank) and formerly the NRC Handelsblad (trade magazine), the Rokin has now given way to a beautiful fountain, bar/restaurant Het Groene Paleis and a subway station of the Noord/Zuidlijn. The street with well-known shops such as Scheltema, The Amsterdam Dungeon, as well as small specialty shops such as Cave Rokin, has acquired a sophisticated appearance. At the Langebrugsteeg, where the dammed part between the Dam and the Spui ends in the thirties of the 20th century and where the Rokin's own water begins today, can be found the equestrian statue of Queen Wilhelmina.

The Kalverstraat, best known as the most expensive street in the Monopoly game, is the most famous shopping street in the Netherlands. The approximately one kilometer long street runs between Dam square and the Muntplein and has 15 side streets and roads, of which the Heiligeweg is the most important. In the shopping street, which is only accessible to pedestrians, you will find almost all well-known fashion houses of the Netherlands, various fast food establishments such as McDonald's and many beautiful boutiques. In this street is De Papegaai - officially the H.H. Peter and Paul Church - located, a former Roman Catholic secret church. In a private house between the Kalverstraat and the Rokin, the Miracle of Amsterdam took place in 1345, as a result of which the annual 'Stille omgang' (silent march) still runs partly through the Kalverstraat. On the Kalverstraat is an entrance to the former Burgerweeshuis, in which the Amsterdam Museum has been located since 1975. The Kalverstraat is crossed halfway by the Spui and also houses the Kalverpassage, which includes the beautiful Calf & Bloom and Blue Amsterdam, the highest point of the Kalverstraat.

This street, which is an extension of the Kalverstraat,  formed, together with the Kalverstraat, the dike on the western bank of the Amstel or also called the Rokin-Damrak water. According to archaeological research, houses that were not intended for agricultural purposes already arose here around 1225. The Nieuwendijk, located between Dam square and the Central Station and which crosses the Nieuwezijds Voorburgwal/Martelaarsgracht after the bend, is now a well-known shopping street. The street has the beautiful Beurspassage to the Damrak and many shops aimed at day visitors and tourists, such as Dille and Kamille, Van de Linde, Tip de Bruin and the Vreng. 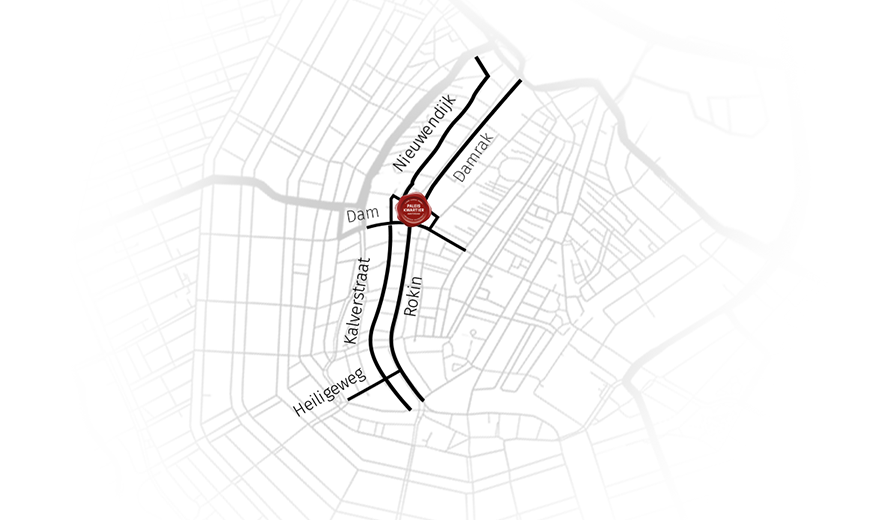